Mad Dogs and Product Managers Go Out in the Midday Sun


I have ventured many times through Rajasthan but on my last visit in July I decided to dig a little deeper into this fascinating part of India, a journey that took me along the Silk Route, to the Great Thar desert and the fascinating city of Jaisalmer, visiting magnificent forts and palaces along the way.

My journey started in the 'blue city' of Jodhpur. Jodhpur has always been one of my favourite cities in Rajasthan, it exudes a majesty, dominated by the Mehrangarh Fort on one hill and the stunning Umaid Bhawan Palace on another. Nestled between there are myriad narrow alleyways, markets and houses painted blue (both for religious and practical reasons to keep cool).

As I explored the many boutique properties and hidden gems of the city, the words of Noel Coward entered my head, but this time it was mad dogs and Product Managers venturing out in the midday sun, a mere 37 degrees Celsius in mid-July.

My 'home' for the night was the Umaid Bhawan Palace. From the moment I entered I felt like royalty. A parasol appeared to protect me from the sun and rose petals were scattered as I entered the grand staircase and into the large domed central feature of the hotel, where mirrored coffee tables reflected the architecture above as peacocks paraded on the immaculate lawns.

Jodhpur is also the gateway to the Great Thar desert and from here I drove the five hours to the desert city of Jaisalmer. This city had always intrigued me, its remoteness had meant I'd never had time to visit on previous journeys. From the 16th to the 18th centuries, Jaisalmer became established on the Silk Route as a stopping point for merchants as they travelled between India and Pakistan, trading their goods.

Sand storms danced across the road and the temperature rose as we cut through the desert, drawing me further towards the fort which dominates Jaisalmer. Unlike other forts in India, Jaisalmer Fort is a thriving community, home to some 3,000 inhabitants. Hidden temples, provided a welcome coolness from the daytime temperature which had now risen to 49 degrees Celsius (note to readers I was travelling out of season as most development trips are. In November the temperatures are far more pleasant, averaging 30 degrees). I could feel the pulse and energy of this community as I walked through the labyrinthine streets within the fort walls. In the late afternoon, my guide took me into the desert where nomadic tribesman still live and camels are the regular form of transportation. Despite the harshness of the landscape, he showed me how plants and insects survive. Whilst I was intrigued by the myths and legends which surround the region, I politely declined the invitation to return to the desert at midnight to explore some of the abandoned villages on a haunted trail, where apparently you can still feel the energy of the spirits of the desert.

After time in the desert, the final leg of my journey was to the city of Nagaur just two hours from Jodhpur. Famous for its annual sufi festival, I stayed within the walls of Ahhichatragarh Fort at Ranvas. Translated as 'Abode of the Queens' the individual havelis were the private residences for the Maharaja Backhat Singh of Jodhpur's ranis, all sixteen of them. Once the day visitors had left, the fort was mine to enjoy. Dating back to 4AD, I had a private tour of the frescoes which decorated the palaces and temples.

Whenever I travel to India I am amazed as to how much there is still to see and do and the list of places to explore and return to gets longer. Perhaps one day I shall even be brave enough to try the haunted trail into Thar Desert. As I left the fort at Nagaur, heading back to the airport, we made one last unexpected stop at a local hospital. But this was no ordinary hospital this was dedicated to the sacred cow. Orphaned calves relaxed in mangers as sick, injured, three-legged and even five-legged cows were carefully nursed back to health in the various 'wards'. Incredible India. It never fails to surprise me. 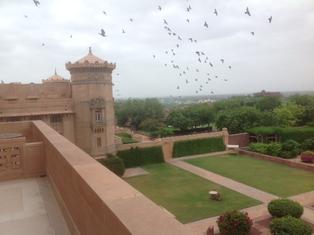 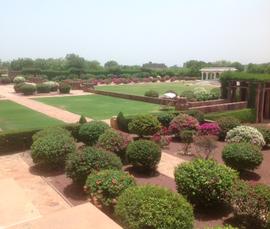 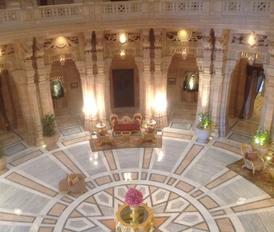 JOURNEYS WITH MY NOTEBOOK - INDIA 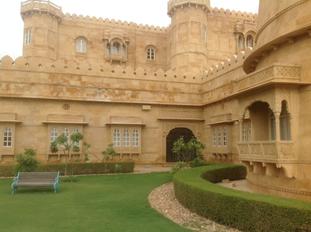